Costa Rican resort hard to get to, even harder to leave 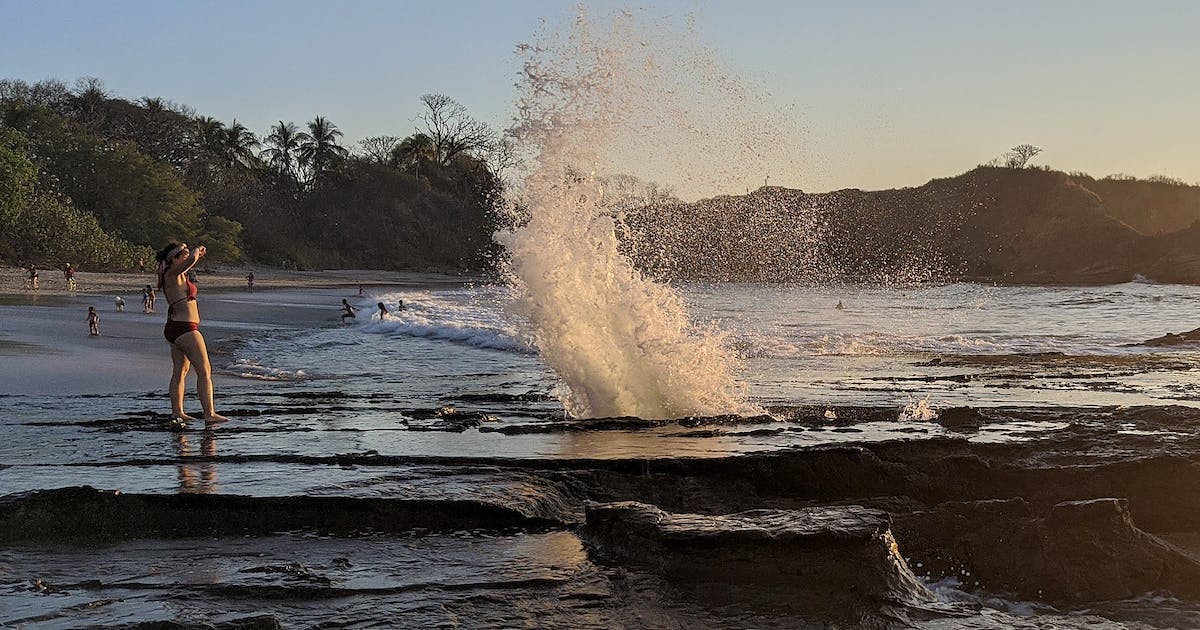 The road to Nosara is unpaved, with good intentions.

After a two-hour drive on the highway to the Pacific coast of Costa Rica, the road becomes rocky, full of potholes and narrow. You start to slow down, dodging trucks and cattle. In arid February, dust coats the lush roadsides, creating a clay-colored trench in the tropical dry forest. There’s no indication it’s a road to anywhere – certainly not a sprawling paradise for vacationers, surfers, yogis and expats.

Still, the voice from the GPS finally told me to turn left, so I guided my rental Toyota down an even more rugged and winding path to the Boutique Lagarta Lodge hotel, where the welcome sign said ” Bad roads bring good people.” It was Leap Day 2020, six days before the novel coronavirus was first confirmed in Costa Rica, and 11 days before it was declared a global pandemic.

Our concierge, Erwin, ushered my mate and I past a heart-shaped infinity pool, to an outdoor lounge, where we were served welcome ginger cocktails and were smitten with the panoramic views . The vast jungle below us was surrounded by small mountains and a wild, deserted beach that stretched to the horizon. We took advantage of the 96 degree afternoon heat.

Nosara is hard to reach and even harder to leave. On the other hand, it is surprisingly accessible. In the winter, two airlines fly nonstop from Minneapolis-St. Paul in the small town of Liberia in the western province of Guanacaste. Before the pandemic, the route carried around 25,000 passengers a year.

This year, flights continue until early April, with fares under $300, about half of what I paid in 2020. All adult tourists are required to show proof of vaccinations or take medical and quarantine insurance. Private establishments can also require vaccination, and the country takes mask-wearing seriously on public transport and in public spaces. But as we found at Nosara 2020, there was little reason to interact with people inside — or even be inside, beyond our king suite.

Many Liberia landings will look inland for a classic Costa Rican experience of volcanoes and rainforests. Others will look west toward the beaches, where the path of least resistance (and fewest potholes) leads to mega-resort towns like Tamarindo. Those in the know head further into the Nicoya Peninsula, to Nosara and beyond.

I had heard about Nosara for years, from fitness instructors who raved about its yoga retreats and surf camps, to name just two of its main activities. Its community of American hippie expats dates back to at least the 1970s. It’s still not uncommon to hear the story of an American family packing up and moving there permanently – and that was before the pandemic.

Modern accommodation ranges from four-star resorts to low-key beach hotels and inns. I chose Lagarta Lodge when I learned that it has its own wildlife sanctuary and a commitment to sustainable tourism. I had been to ecolodges, but having your own reservation sounded next level. All rooms have the same balcony view, but each spot feels secluded. The whole place merges clandestinely into the cliff – Frank Lloyd Wright in the tropics.

A sign in our room advised to lock our sliding patio doors or the coatis (a kind of long-nosed raccoon) would cleverly open them and steal the sugar for the espresso machine. I pulled one trying to do just that when I woke up one morning. But most nights we just turned off the air conditioning, opened the glass doors and fell asleep listening to the wind and crashing waves, followed at dawn by the guttural grunts of howler monkeys.

Get out of the bubble

A Lagarta guest could spend most or all of their time in the resort’s bubble, lounging by the infinity pool, and that plan sounds perfectly enchanting, especially with one of the best restaurants in town, Chirriboca, on the large open-air terrace. Each morning we would start with the national breakfast of gallo pinto (black beans and rice) with eggs, plantains and a slice of fried cheese – or switch it up with the spicier “Huevos a caballo” ranchero version , while looking down at early bird surfers on Nosara Beach.

As night falls, Chirriboca brings people from all over Nosara for a relatively dressy contemporary Latin dinner; I still remember the chef’s artistic and substantial fusion of a trout fillet and a whole avocado, served over an elote corn risotto, or the Caribbean snapper coated in a tangy ginger-nut sauce coco – all enjoyed while a bright planet Venus descended on this same beach every night.

But I’m too restless to be confined to the walls of the station. Laura, the lovely guest relations manager, approached us at breakfast. After detailing our wish lists, she returned with a neon post-it note listing a reserved schedule for the week: surf lessons this afternoon, followed by daily tours of the nature reserve and great Nosara. My partner Sabrina was taking a yoga class (with Laura as an instructor) while I was on a kayaking trip.

It was a relief to surrender to a plan, with lots of downtime built in. Sabrina had to work three days, but between the infinity pool, the living room, and the view from our bedroom, she basically had the best remote desktop ever, and there was plenty of time after work to go to the beach or go horseback riding. A few weeks later, we wished we could return to Lagarta for the new phenomenon of working from home.

We boarded a shuttle to Nosara Surf School, in a cozy neighborhood of bars and shops near Playa Guiones, the legendary surf beach. We met up with our instructor, Chico, covered our faces in stage makeup-like sunscreen, and walked our boards to the beach, where we were immersed in midday sand hell. Despite Chico’s valiant efforts, we weren’t able to make much progress before getting shelter from the bright sun. Chico admitted his surprise that we booked a 1pm lesson, and I learned that the prime times for activities were morning and late afternoon, with a break in between.

We recuperated with watermelon and coconut smoothies and a banana coffee from a nearby juice truck, then strolled to the leafy patio of an establishment called Luv Burger for a pair of delicious sliders made from vegetables. Sabrina hailed a three-wheeled “tuk tuk” taxi and I returned to the lodge to learn the lay of the land.

What tourists call Nosara is a tangle of neighborhoods hidden behind two main beaches: the long Playa Guiones and the cozy Playa Pelada. The secret to Nosara’s beauty is that it sits along the Ostional National Wildlife Refuge, a prime nesting ground for sea turtles where development is restricted to less than 200 meters high tide. While in towns like Tamarindo hotels and restaurants noisily adjoin the beach, in Nosara all new developments are nestled in the woods, and the wide beaches are the best.

In the early evening, the intimate Playa Pelada becomes a social hub. Seawater erupts through a tidal vent formed in volcanic rock. Riders criss-cross the sand and would-be influencers hold golden hour photo shoots. Diners fill the sandy, Mediterranean-inspired courtyard of La Luna — one of the only “grandfathered” structures on the beach — and Costa Ricans gather on blankets for the nightly sunset-watching ritual. At dusk, everyone disappears into the jungle.

On Monday morning, I joined the kayaking trip with Jiaro, a naturalist from the Lagarta Lodge Wildlife Preserve, and a young family from Nantucket, Mass. In the heart of the reserve, we pushed into the lazy Rio de la Montaña. For an hour of paddling, we floated under branches occupied by howler monkeys, including babies learning to swing by their tails. As I hovered on the water, the Nantucket clan grew alarmed, gesturing wildly to my left. A crocodile was basking on a sandbar about 15 feet from my boat.

The family bailed out halfway through, so Jiaro led me on a private paddle down another stretch of the river. Landing on a peninsula overlooking the ocean, Jiaro pulled out a machete and cracked open a green coconut, serving me a refreshing Costa Rican drink of pipa fria (coconut water).

Almost every interaction I had naturally included hospitality like this. On our horseback ride, we meandered through the wildlife sanctuary, emerged along the beach, and trotted through the waves. Our guide hid at an outdoor dive bar to buy us beers, which allowed me to try holding the reins in one hand, a cerveza in the other, while monkeys chattered on the power lines above us.

At dawn, I joined a walking tour through the reserve, traversing bone-dry mangrove forest on raised log steps. The naturalist, Carlos, quietly helped guests spot motley tropical birds – the long-tailed manakin, the white-throated jay – and led us to pochot trees with terrifying spikes covering their green trunks, as well as the imposing guanacaste, the national tree that gives its name to this province.

The same guide, Carlos, met me later for a mountain bike tour. He led me to a historic cemetery for the area’s first settlers, laughing when I asked if it was the surfers’ resting place. We stopped at the Beach Dog Cafe for an afternoon drink, where he talked about his lifelong commitment to Costa Rican nature. He nodded in agreement with a sign in the inn that read, “Welcome home, feel free to be yourself.”

When I glanced at my phone, a cascade of notifications hinted at a growing sense of alarm in me. After I had been blissful for four days in Nosara, I vaguely felt that people were starting to panic about this so-called coronavirus.

I turned off my phone and put it away. The world’s problems felt thousands of miles away and I wasn’t ready to realize it yet.