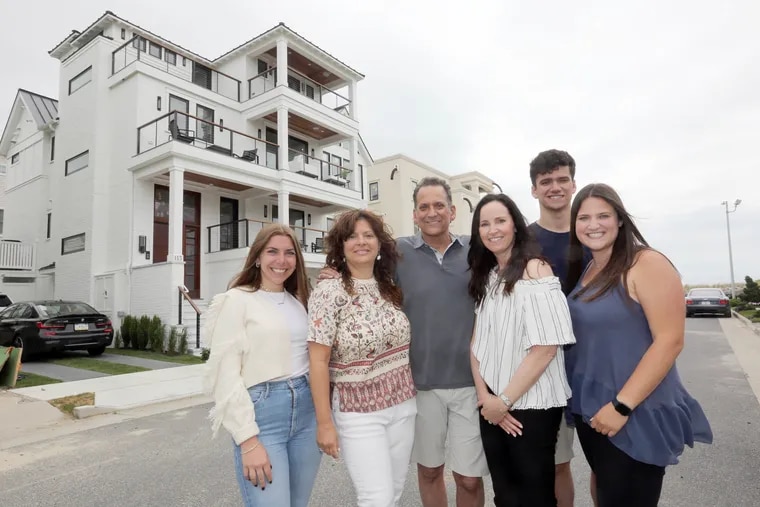 There is more to this transformation than just progress…perhaps even a little enchantment.

When the Borows moved in 42 years ago, they realized the first floor had no view of the beach. Renovations followed: windows, windows, windows were added, along with a third bathroom, a clever second floor expansion to accommodate two more bedrooms, wraparound brick patios, and a restoration of the door in darling wood.

The Cape Cod A-frame, now square and slightly contemporary, then seemed so perfect that The Inquirer featured it in an article – written by this journalist – in 1981.

“It wasn’t just a house; it was part of our family,” said Gabrielle Frantz-Greenfield, Borow’s youngest child, who was 13 in a photo with the 1981 article.

“I loved the sounds of the people, the ocean and our laughter!” said Frantz-Greenfield wistfully. “When I grew up and had my own children – Moriah and Eli – that’s when we all shared memories and so much love!”

But there came a time, in 2017, when the Borows decided to sell. “When we bought the house, the grandson of the previous owners told me he was sorry his grandparents sold it,” said Ken Borow, Gabrielle’s father.

“And now, are we sorry that we sold it?” asked his wife, Elaine. “We were 80, we were moving to Florida and we didn’t want two houses. But it was a family gathering house. My children and their children grew up there. Friends and relatives visited. We had street barbecues with neighbors. It was that kind of street.

“When my parents sold the house, we were all devastated,” said Frantz-Greenfield, who heard her parents express their regret before the ink dried on the sale agreement. “They sold it to the nicest people in the world, but I couldn’t walk down the street without sobbing.”

Sometime after the sale, she rode her bike home to say goodbye. “As I was standing in front, Brad Beidner, the new owner, came out,” Frantz-Greenfield recalled. “I showed up, trying to control my tears. Looking at me kindly, he said, ‘Do you want to feel better? Come with me to watch the ocean. ”

They headed out to the back patio, where a stunned Frantz-Greenfield exclaimed, “I can’t see the ocean!”

Newly constructed dunes, created to mitigate flooding, completely obscured the once perfect view – a consequence that had sparked quite a controversy among property owners in the area.

“Do you feel better now?” Beidner asked. The teary-eyed Frantz-Greenfield nodded and accepted Beidner’s hug and offered to look around the house. “I felt so at home that I almost opened the fridge!” she says.

Perhaps it was the aura of fond memories lurking in every corner that drew Michelle and Brad Beidner to the Borows. “That’s it!” Michelle said. “I felt it as soon as we walked in.”

“There was something special about the house. He had a great personal charm, a sort of gravitational pull,” Brad, a private financial markets investor, said after a start on Wall Street. Originally from Tenafly, NJ, he spent his early summers on the beaches of Long Island, NY, where “things were very remote,” he said. “Here we are right by the beach and walking distance to the fishing pier, shops, restaurants. It’s all about friendly people and Margate’s Downbeach Deli!”

Michelle, a retired partner of MiCa Sports, an executive search firm in New York, grew up in Upper Dublin, Montgomery County, and spent her summers in Margate.

The Beidners loved the house, but only three weeks after moving in, the dunes were built up and the great views disappeared. Nevertheless, the Beidners spent three summers enjoying the charms of the house and the access to the beach through the little wooden door.

Up was the only way forward and was becoming de rigueur in and around Margate – namely, new construction on either side of the Beidner House. But first, lovely Cape Cod had to come down.

Hammonton architect Bob Lolio, Buena builder Ben Burghen and Surroundings, a Northfield design firm, have been hired to create a perfect new home for the Beidners. Christine Schwartz, owner of Surroundings, met them around the same time she hired young designer Moriah Frantz. When Schwartz told Frantz about Margate’s new client, a wide-eyed Frantz blurted out, “Oh my God! It was my grandparents’ house. I grew up there!”

“It seemed like fate, and Christine brought me to work,” she said. “When I told Michelle about my connection to the house, she gave me the biggest hug!”

What Frantz didn’t tell the Beidners was that the pull of the house was so strong that soon after the sale, she and her mother were going there when no one was home to sit down. on the porch and imagine they were still living there.

The Beidners invited the Borow family to the Cape Cod demolition, offering them souvenirs — anything they wanted, like doorknobs, locks, bricks — “everything except the wooden door,” Frantz said. -Greenfield, who has since heard that it may have been the property of the town of Margate.

Over the next 16 months, the new home soared, stretching the house from two levels to five, and from approximately 1,900 square feet to approximately 4,000, offering five bedrooms, five bathrooms, seven terraces and front and rear patios.

A tour of the house begins with the garage and storage area at ground level. Up a few steps, and through the custom-designed mahogany front door is the entrance hall – level 2 – where a whimsical chandelier from Canada offers a warm welcome.

Up further stairs – or via the house’s elevator – Level 3 offers bedrooms and bathrooms for her 18-year-old son Spencer and 20-year-old daughter Gari, as well as a guest bedroom. friends and a bathroom, a spacious office/living room with sofa beds, a rear staircase to the ground floor and utility room with black tiled flooring. The etched frosted glass door panel reads “Laundry room, help wanted”.

Level 4 features the expansive open great room with many windows, where glass wall panels open to a partially covered deck – complete with gas grill – overlooking the shoreline. “It’s all in the view,” Michelle said, pointing out that the marble surrounding the living room’s gas fireplace resembles ocean waves. Hand-blown glass globes of light from the Czech Republic hang playfully from the vaulted ceiling.

In the dining room, a Costa Rican bleached mango wood table seats 10 people under a whimsical chandelier reminiscent of an organic molecule.

The glazed corner sink in the kitchen area overlooks the beach. Complementing a built-in floor-to-ceiling refrigerator, freezer drawers are concealed beneath the island’s wide breakfast bar/counter. Next to the kitchen is a pantry and a bar.

A large halo-shaped overhead light emits an ethereal glow up the stairs to the master bedroom and bathroom (with porcelain-walled steam shower and quartzite bench) on Level 5, which offers spectacular views.

“From three decks, you can see from Atlantic City to Ocean City, and all the 4th of July fireworks,” Michelle said, standing next to the hot tub on the bedroom deck. “We sit here at night watching the colourful, changing designs of the ferris wheel on the distant pier.”

The Beidners wanted a contemporary, yet warm and organic touch to their family heritage. “And yes! We had it,” Michelle said. “Our dream has come true. I see our family and friends making memories here for years to come. I love the smells and sounds of the ocean, and watch the sunrise from our bed and the sunset from the covered tub deck.”

And the little wooden gate behind the new house, a final reminder of charming Cape Cod? It’s still there, providing beach access – and memories for many generations of two families.

Kareena Kapoor enjoys the view on the beach with Jeh during an exotic vacation in the Maldives; View the photo